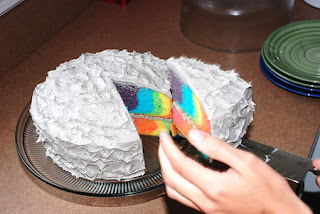 When they came out with the food pyramid, they recommended that we eat a rainbow of foods. I don't think they meant that you should eat anything colorful, but rather things that are NATURALLY colored. I have only become concerned about food coloring in my food over the last couple of years. Luckily, since before this I was concerned with high-fructose corn syrup and trans fats in my foods, I also avoided most food that had food coloring in them.
In a double blind British study done in 2007, food coloring additives were linked to increased hyperactivity in kids that were not diagnosed with ADD. Previous studies have been done which linked food coloring additives to increased hyperactivity with kids who were diagnosed with ADD. Follow this link to a summary of the British study done in 2007. I was a bit surprised when I was talking to my husband who is a psychiatrist, when he said that links to food coloring and hyperactivity in children were found in multiple studies.
Over the last year or two, we have worked hard to get food coloring out of our house. To give you an example of how much of our food is tainted with these food coloring additives, I looked up one of the food dyes that was in the study noted above. According to Wikipedia, Sunset Yellow, aka, orange yellow S, aka yellow 6, is found in the following kinds of foods: It may be found in orange squash, orange jelly, marzipan, Swiss roll, apricot jam, citrus marmalade, lemon curd,sweets, hot chocolate mix and packet soups, trifle mix, breadcrumbs and cheese sauce mix and soft drinks. Specifically it can be found in the capsules of DayQuil (in high concentrations), some extra strength Tylenol, Astro peach yogurt (potentially others), fortune cookies, some red sauces, certain pound cakes, snack chips and other yellow, orange, and red food products.
At first, my research lead me to believe that yellow 6 and others were going to be taken out of the food supply by 2009. I almost stopped writting this post, but then I decided to grab a snack. I chose baked cheetos. I had bought them at Target out of sypathy for my 3 children I left at home while I shopped. (Why is it that we think it is a good "treat" to give our kids "junk" for behaving!) I just looked at the ingredient list and saw at the bottom, yellow 5 and yellow 6. 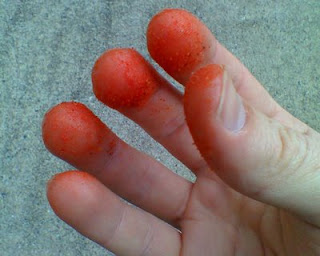 My Cheetos didn't expired until 2010, so I started investigating again. It looks like the EU asked for a volantary removal of the colors by 2009, and the US well . . .I couldn't find anything about it being removed. Before you move on, you may want to view this commercial that just shows how unnatural these food colorings are http://www.youtube.com/watch?v=8ab4L9prV3g
I found on the FDA's website the aproved food coloring additives:
D&C Blue Nos. 1 and 2
FD&C Green No. 3
FD&C Red Nos. 3 and 40
FD&C Yellow Nos. 5 and 6
Orange B
Citrus Red No. 2
annatto extract
beta-carotene
grape skin extract
cochineal extract or carmine
paprika oleoresin
caramel color
fruit and vegetable juices
saffron
(Note: Exempt color additives are not required to be declared by name on labels but may be declared simply as colorings or color added).
Half of the food coloring additives tested in the British study are currently approved for consumption in the United States. In the study, the full names of the food additives are used. These are the names that are usually listed on the ingredients list. Red 3, yellow 6, and Red 40. While these were the ones studied that are in our food supply, I am sure that we should assume that other food coloring additive are not safe as well. It would be the best decision to look at ingredient lists and try to avoid buying foods with any food coloring additives (something with a # behind it especially). Because you do not need a lot of food coloring in a food, most of the time, the food coloring will be at the bottom of the ingredient list (since they have to put the ingredients in order by weight).
You should be in the habit of reading ingredients of food. This may seem tedius, but as you do this, you will learn which foods are healthy, and then it will take less time. I also look out for foods that have trans fats (hydrogenated blah blah blah) and foods that have high-fructose corn syrup in them.
As a general rule, easy ways to avoid foods with food coloring additives in them is to buy lots of fresh fruits and vegetables, organic foods, and whole foods. Whole foods are foods that come from their original state. This would include fruits, veggies, raw nuts, whole wheat flour, milk, cheese, and fresh meat (not cold cuts). These are foods that we need to be eating more of. Also, if a food is blue, or purple, and is not a fruit or vegetable, it probably has food coloring in it. Organic foods typically use beet juice or other vegetable juices for their food coloring effects. These seem to be safe. 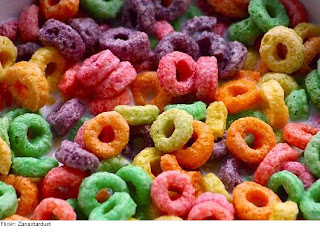 Dr. Sears recommends that you teach your children when you grocery shop with them. Teach them that the healthiest foods are kept on the perimeters of the grocery store. In general, the middle section of the grocery store has the most processed foods. Also teach your children that bright colored boxes are there to trick you into buying them. They know that their food is unhealthy, so they try to get you to buy it by making their boxes look pretty.
Recently my husband and I noticed that pickles all have food coloring in them. Claussen's pickles do NOT. They can be found in the refridgerated section. 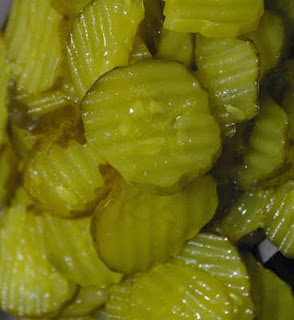 One other study in 1994 found this conclusion about tartrazine (yellow #5): Behavioral changes in irritability, restlessness, and sleep disturbance are associated with the ingestion of tartrazine in some children. See this link to see the full abstract.
Before I end, consider for a moment how you would be willing to pay for your child to have a tutor when they are behind in school, yet how often are we unwilling to pay the 40 cents more for a product that is a healthier option?
Posted by Lisa at 8:41 AM