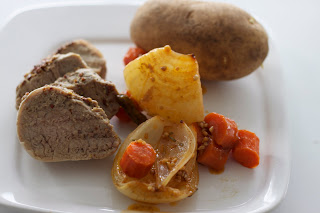 One of the easiest things to make is a good pork tenderloin. It looks fancy, but it is really easy to make. Just be sure you buy enough, because it shrinks down a lot.
Pork Tenderloin
Heat a Tablespoon of canola oil in a frying pan. Salt and Pepper your pork tenderloin. Also, heat your oven to 450 degrees. Brown Pork in frying pan on all sides for about 10 minutes total. Put in a 9 x 13, or something similar and bake on 450 degrees for 15-20 minutes. Before putting in oven, put one of the following sauces on top. It will be pink in the middle. Be sure your meat thermometer reaches 135 degree before taking it out, and let it sit until it reaches 145 degree, or just cook it for the full 20 minutes in the oven.
Maple Glaze
1 1/4 Cups maple syrup (do not substitute fake syrup for this)
1/2 teaspoon cinnamon
1/4 teaspoon cloves
1/8 teaspoon cayenne
or
1 Cup apricot preserves
1/2 cup orange juice
3 Tablespoons juice from 1 lemon
1/4 Cup dried apricots quartered.
Sister Bowen's favorite Roasted Vegetables
I made a version of this last night. I left out the potatoes since we were having baked potatoes.
6 baby carrots, halved
3 small yokon gold potatoes
3 small parsnips
1 large sweet potato
1 each large red and yellow onion
1 each yellow and red sweet peppers
6 garlic cloves, unpeeled
1/2 C chicken broth
2 TB olive oil
salt and pepper
2 TB balsamic vinegar
2-3 springs rosemary
Peel and cut into 1 -inch pieces: Yukon and sweet potatoes, and parsnips. Cut onions crosswise into halves, peel and keep the roots intact. Cut peppers lengthwise. In large shallow roasting pan, combine all of the veggies and the garlic. Drizzle mixture with broth and olive oil. Sprinkle with salt and pepper. Roast uncovered in a 450 degree oven for 45 minutes, stirring veggies occasionally. Stir in balsamic vinegar and rosemary sprigs and roast 14 more minutes or until veggies are tender. Makes 6 servings.
Baked Potatoes
I didn't do it this way last night, but I like to wrap it in foil with a little drizzle of olive oil and season salt and bake in oven until soft. Just stick it in with the roasted veggies.
I wouldn't make this meal on a weeknight again. This is better for a weekend when you have more time.
Posted by Lisa at 9:34 AM