So do you remember that post I did about the McDonalds hamburger that was almost a year old and still looked the same? Well my daughter Amanda needed a science fair project, so I gave her that idea, and she was really excited about it. 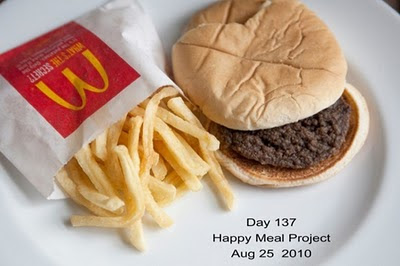 The main difference between her experiment and the McDonald's hamburger that stayed the same is that she used a control . . . a homemade hamburger! If you don't have a control, then it is all hype and NOT GOOD SCIENCE! 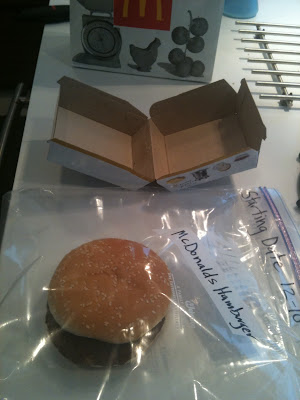 This is what she did . . . Took a plain McDonald's 1/4 pounder hamburger, and put it in a zip lock bag with a couple of slits in it (the thought of a hamburger rotting in the open grossed me out). Then she took and then a homemade 1/4 pound patty on a homemade hamburger bun and put that in a gallon zip lock bag with a couple slits in it. She then let them sit on top of our cupboards for 6 weeks and took pictures each week to see the change. I wrote the date on the bags with a permanent marker so we knew when each picture was taken. 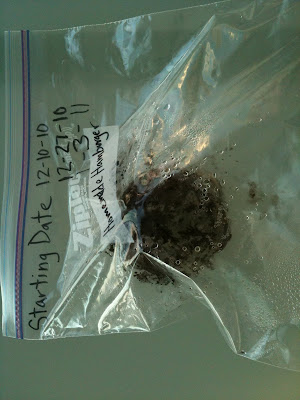 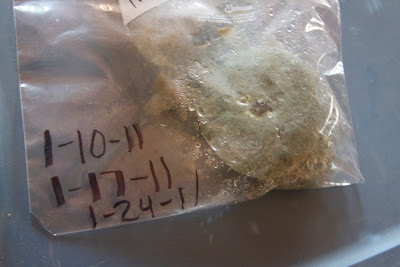 Mold needs moister to grow, so by putting the hamburgers in ziplock bags, there was enough moister to allow the mold to grow. 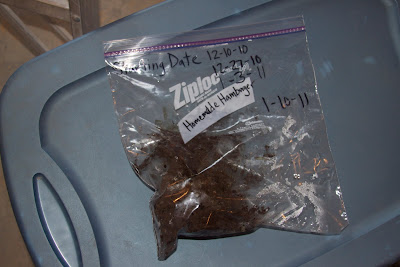 When we were trying to figure out why our McD's burger got mold, but this other one did not, we came across this great website that took about 9 different hamburgers and put them under different environments. Some where kept in a container, and some in the open air. They came to the conclusion that the McDonald's hamburger's moister evaporated so quickly, that the mold didn't have a chance to grow. Click here to see the blog post.
We also found out that a McD's bun has a ton of preservatives in it. That is probably why the black mold (one of the most common molds) didn't grow on the McDonald's burger.
Here is the ingredients list of the bun:
Enriched flour (bleached wheat flour, malted barley flour, niacin, reduced iron, thiamin mononitrate, riboflavin, folic acid, enzymes), water, high fructose corn syrup, sugar, yeast,soybean oil and/or partially hydrogenated soybean oil, contains 2% or less of the following: salt, calcium sulfate, calcium carbonate, wheat gluten, ammonium sulfate, ammonium chloride, dough conditioners (sodium stearoyl lactylate, datem, ascorbic acid, azodicarbonamide, mono- and diglycerides, ethoxylated monoglycerides, monocalcium phosphate, enzymes, guar gum, calcium peroxide, soy flour), calcium propionate and sodium propionate (preservatives), soy lecithin.
I explained to Amanda that mold spores are literally everywhere! But, if they don't have the right environment (moister, heat, and sometime the right light, or darkness), then the mold will not grow. I remember learning about this in a biology class I had in college, and it grossed me out for weeks. They showed us a video of mold spores in slow motion.
Such a fun experiment. She won first prize too! Great science Amanda!
Posted by Lisa at 8:57 AM