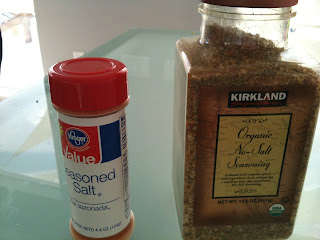 In my house growing up, if you asked someone to "pass" you something at the dinner table, you often ended up "catching" what you asked for. I wasn't going to do a post on salt until I was shocked one day in my own kitchen. Here is the story. I was cooking some spanish rice which calls for seasoned salt. I had just picked up some more season salt at the grocery store the week before. Before I put it in, I looked at the back of the bottle at the ingredients list. I was just curious what was in seasoned salt.
99 cent Kroger Brand Seasoned Salt Ingredients:
Gross right?
Maybe that is what I get for buying the store brand.
I do want to tell you about a healthy alternative. Costco sells a No-Salt Seasoning that I like. I often use it when I think a recipe calls for too much salt. I only use it in savory dishes (not muffins, or cookies). It is organic and has worked out great. Here is the description on the front. "A blend of 21 organic spices and ingredients from around the world go into this sensational No-Salt Seasoning." Here are the first 10 ingredients (they are all organic, so I won't write that 10 times).
It is one of those things where you don't feel like you could add too much.
The big question that I have gotten from more than one person is, "Is salt really that bad for you?" I used to say, not unless you have high blood pressure. I said this because in one of my health classes they said that only about 10% of the population were salt sensitive. Meaning that if they ate too much salt, it made their blood pressure go up. A recent study that came out in March showed that up to 69% of Americans are in the group for people that should watch their salt intake (older than 40 years, or black, or people with high blood pressure). The reason you have to cut down on salt after age 40 is because your kidney's become less efficient at getting rid of extra salt at this age.
When you step back and look at the whole picture, as a nation we are eating more processed foods and eating out more often as well. Those are the 2 places that we get the most of our salt in our diet. Let me make it clear what "processed food" is. Processed food is food that has been prepared by someone else. Some things that are in that category are: frozen pizza, frozen burritos, anything that you get from a restaurant.
Things that are NOT processed foods are: homemade soups, lettuce, fresh fruits and vegetables, from scratch cupcakes, and so on.
The bottom line is that when someone else makes the food, you don't have control of the amount of salt in the food.
So be careful of eating too much processed foods, and try a no-salt seasoning.
Posted by Lisa at 8:12 AM