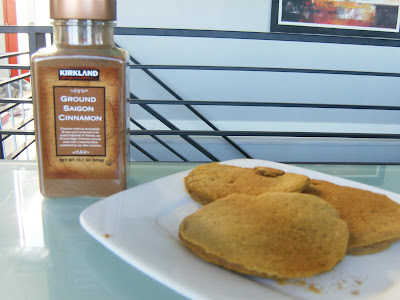 Someone on facebook (thanks Corinne) gave me the idea of pumpkin pancakes.  I had made pumpkin chocolate chip bread, and I had left over canned pumpkin.  With one jar of pumpkin I made
I used a recipe from allrecipes.com.  It turned out really well.  I used 1/2 whole wheat, but I think next time I would just do all whole wheat.
The thing I love about making pancakes is that you just throw all the ingredients together and mix it up.  You don't need a mixer, and you really don't need to have any order to putting the ingredients in (I am sure some people would disagree:)
I was talking to my sister-in-law Katy yesterday, and I was telling her about the pumpkin applesauce baby food with a dash of cinnamon.  I mentioned that I did the cinnamon because it is so good for you.  She didn't know this, so I thought this blog post would be the perfect time to talk about the benefits of cinnamon.
Did you know?
The funniest part about this blog post is that the recipe doesn't even have cinnamon in it!  So I guess, throw some in for good measure!
I bought the big thing of cinnamon that is in the picture for $3.00 at Costco!  What a great deal.  Next time you are at Costco, be sure to pick some up.
Final note.  So sorry I haven't blogged for so long.  I moved about 3 weeks ago and was just trying to settle into the new house.
Posted by Lisa at 8:01 AM