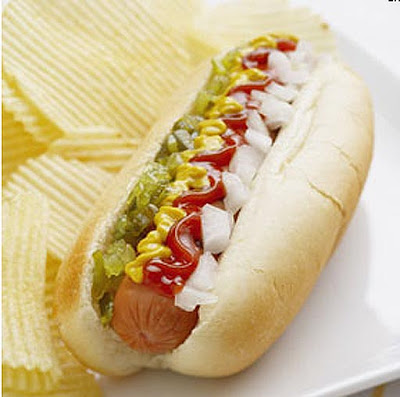 Growing up, I loved eating cold hot dogs out of the fridge. It was a great snack. Sodium Nitrites are found in most processed meats. Picture yourself at the grocery store buying hot dogs. Now look at all the lunch meats and sausages all around the hot dogs . . . all of it has Sodium Nitrate. Sodium Nitrite is what is formed when you ingest sodium nitrates. Sodium Nitrite is a known carcinogen (causes cancer). You have to eat vitamin C to negate the nitrites. So you would have to have a slice of tomato on your sandwich. Sodium nitrite is what is formed as the sodium nitrite is oxidized (exposed to oxygen). Keep in mind as I talk about "meats" that I am referring to processed meat. NOT chicken, steak, pork chops, and those fresh meats. Examples of meats that have nitrites in them ARE bacon, lunch meat, sausage, hot dogs, and jerky.

Sodium nitrite is a food additive that prevents the growth of the bacteria that causes botulism. Potassium nitrate is used for the same purpose. It is good that our meats don't give us botulism, but nitrates are toxic in high amounts. They die the sodium nitrite bright pink so that it doesn't get mixed up as anything else since it is toxic in high amounts. This is why so much of the meats with nitrates in it are kinda pink (think hot dogs).

If you read my recent post on breakfast burritos, you remember me saying that processed meat consumption gave you a 67% higher rate of pancreatic cancer. Pancreatic cancer is the 5th leading cause of cancer-related mortality in the United States. On a stage for stage basis, cancer of the pancreas is met with the shortest median survival time out of all cancer types, most often less than 1 year. Pancreatic cancer is not something you want to get!

What are some other alternatives to never eating another cold cut sandwich and summertime hot dog?


To sum up, here are the top reasons not to feed your family lunch meats and hot dogs with nitrates.